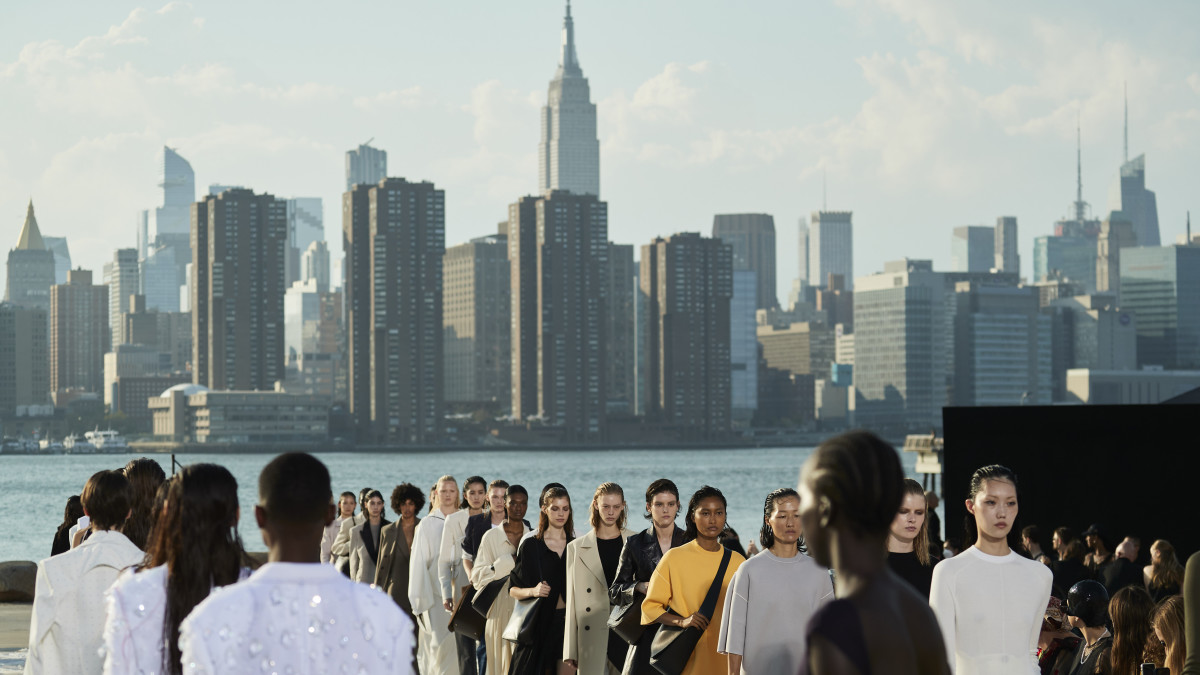 New York Fashion Week got a bit of its groove back this season. After an 18-month break, designers dug deep and allowed themselves to get swept up in the fervent, anything-goes excitement and magic that comes with creating clothes for a new season. Despite some rain and smaller-scale events, Spring 2022 in the Big Apple felt buzzy. This was fashion week as a performance — and just like any good show, it was a means of escapism.

On the runways, there were powerful stories and dramatic fantasies that allowed us to dream about getting dressed up again. (That, and a whole lot of Kelly green.) Read on for a closer look at the biggest trends to emerge from NYFW, and stay tuned for what will come out of the other fashion capitals in the coming weeks.

Checkerboard prints were the standout print of summer and, to the dismay of florals and stripes, they will continue to rule our wardrobes into next spring. Designers updated the board game pattern with sequins and crystals.

Bras and Bikinis as Tops

The underwear-as-outerwear trend has been around for a few seasons now, but swimwear-as-outerwear is relatively new — whether shown layered under button-down shirts or alone with a mini skirt, the triangle bikini emerged as the quiet top hero this season.

Designers keep bubble hems in their sartorial tool kit for when they want to marry simplicity and drama. With hopefully a bustling social calendar next season, they whipped up several dresses and skirts with puffy, space-occupying bottoms that will be sure to draw plenty of compliments from other party guests come March.

The fervor around sexy sweater sis showing no signs of slowing down: Skin-tight knitwear that can be worn at a club or on chilly morning en route to pilates was spotted all over the Spring 2022 runways in New York, often taking the form of a clingy midi dress.

There’s fringe, and then there’s Fringe with a capital “F” — and the latter was served on the Spring 2022 runways. This wasn’t the delicate string cheese trimmings that we’re used to; instead, labels like Proenza Schouler and Vaquera treated us to garments with mop-like masses of shredded fabric.

Going-out apparel is in its prime: The m.o. for next spring is the shorter and more see-through, the better. Christian Cowan and Laquan Smith proudly led that parade, but they were far from the only ones to push forth this sartorial agenda.

Designers re-envisioned the classic trench coat, making it less of a boring transitional staple and more of a statement topper for spring. At 3.1 Phillip Lim and Carolina Herrera, the waterproof jacket got updated with ruffles and power shoulders.

Matching sets have become the winning formula for passing the dressing test at a casual soirée. Brands stuck to this easy closet recipe for next spring, pairing cropped tops with everything from Bermuda shorts to floor-length skirts in the same color or pattern.

While feathers are one of the more extravagant embellishments in fashion, and often get grouped with couture-level confections that don’t have a place in the closet of mere mortals, the wispy details in the latest warm-weather collections are very approachable — think a flirty trim on a mini skirt or off-the-shoulder top.

Early 2000s music video garments — think scarf halter tops and super low-rise pants — cropped up in a number of collections in New York, leading us to believe that the Y2K pop princess Christina Aguilera was pinned to multiple moodboards.

Stay current on the latest trends, news and people shaping the fashion industry. Sign up for our daily newsletter.

Check These Ethnic Fashion Trends Of 2021