Who is Christian Dior?

French designer  Christian  Dior  (January 21st, 1905 – October 24th, 1957) was founder of one of the most outstanding fashion houses internationally.  He was the second of five children and came from a wealthy background. Christian Dior did not fulfill his family's dream that he would become a diplomat. Instead he pursued a career in fashion. His fashion career began early when he sold fashion sketches. He subsequently left school at age 23,  Aided by financial support from his father, Dior opened up a small art gallery. 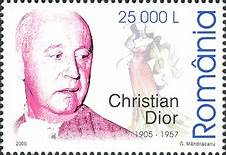 However, by the time he was 28 years old, he was forced to close his business. His unfortunate move was triggered by the deaths of his mother and brother and loss of the family business during the Great Depression.Undaunted, Dior pursued his dreams to make it in fashion and began to work with french fashion designer Robert Piguet. It was from Robert Piguet that he learnt  "virtues of simplicity through which true elegance must come."

Javascript not detected. Javascript required for this site to function. Please enable it in your browser settings and refresh this page.