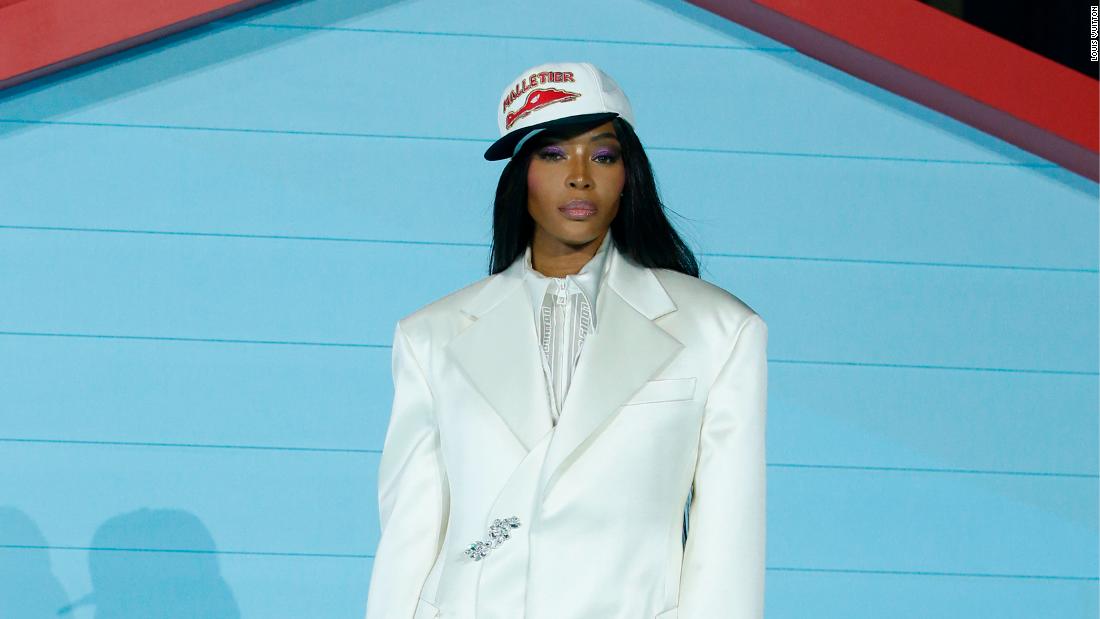 CNN Style is one of the official media partners of Paris Fashion Week. See all coverage here.Louis Vuitton has unveiled the final collection by its late artistic director of menswear, Virgil Abloh. Abloh died on November 28, 2021 after a two-year battle with cancer, and just a few days later, Louis Vuitton held a (previously scheduled) fashion show in Miami that featured updates and tweaks to Abloh’s Spring-Summer 2022 roster. It initially seemed as if that event would be the designer’s last showcase, but he’d already completed much of Fall-Winter 2022.

The collection — Abloh’s eighth since his groundbreaking appointment to the 168-year-old house in 2018 — was revealed Thursday at Paris Fashion Week in a repeat format: first for press and influencers, then, a few hours later, for friends and family.

The catwalk’s unfolding was a team effort spearheaded by Ib Kamara, the Sierra Leone-born multidisciplinary creative and editor-in-chief of the fashion publication Dazed. Kamara, whose high-profile styling gigs have included Fenty ads for Rihanna and numerous international Vogue covers, began collaborating with Abloh ahead of Louis Vuitton’s Spring-Summer 2021 collection. Since then, he has styled Louis Vuitton menswear runway shows as well as campaigns.

Over a Zoom call from Paris, Kamara spoke candidly about the process . “We wanted to keep it where we thought Virgil was with us, but push it to where Virgil would’ve taken it,” he said. “One of the most brilliant things about the man was that he could introduce starkly new ideas every season, but that these ideas also intertwined with seasons from the past.”

Louis Vuitton’s CEO, Michael Burke, echoed that sentiment in an interview given to the trade publication Women’s Wear Daily. “There is a circular aspect to it, so it comes back to certain things that were surprising in the first show (in 2018)… there are other metaphors that he’s always used: there’s the metaphor of the house, the metaphor of the boy.” One element from Abloh’s first show that resurfaced in Fall-Winter 2022 was a “Wizard of Oz” motif.

Abloh also retained an ongoing fascination with dreams, youthfulness and the concept — often abstract — of home, and the set of Thursday’s show reflected a mashup of all of it. The presentation was staged in a surreal periwinkle dreamscape, complete with a full orchestra performing from an extended dining room table to a score by rapper Tyler the Creator. There was a semi-sunken house, a Shaker-esque chair that collapsed and righted itself, and a king-size bed.

The performers and models danced, jumped on the bed, and appeared to have fitful episodes — lost, or rather enthralled by, their reveries.

Kamara noted that “there is a big play on tapestry. The team has really taken it to a new dimension. Virgil’s spin on tapestry, whether in bags or garments and jackets… it’s quite… there’s a preciousness and a care to it. I think it’s very daring in menswear to introduce that care. Stereotypically, men are supposed to be ‘strong,’ but there’s a delicate point of view here.”

There was a moving ethereal quality to the presentation, lace kites fashioned into angelic wings. Credit: Fréderique and Ludwig Bonnet

That perspective was made rather movingly clear with looks that included diaphanous lace kites, worn across the back to mimic wings. These held the obvious suggestion of something angelic, but beneath that, a more resonant message — to be youthful and dreaming is to always be looking upward.

“I believe that Virgil would’ve been happy,” Kamara said. “I think the most enduring thing here … is that he really could bring in the fresh while still achieving this same, consistent feeling. I look at it this way: old flames, but with a romance that always seems new.”