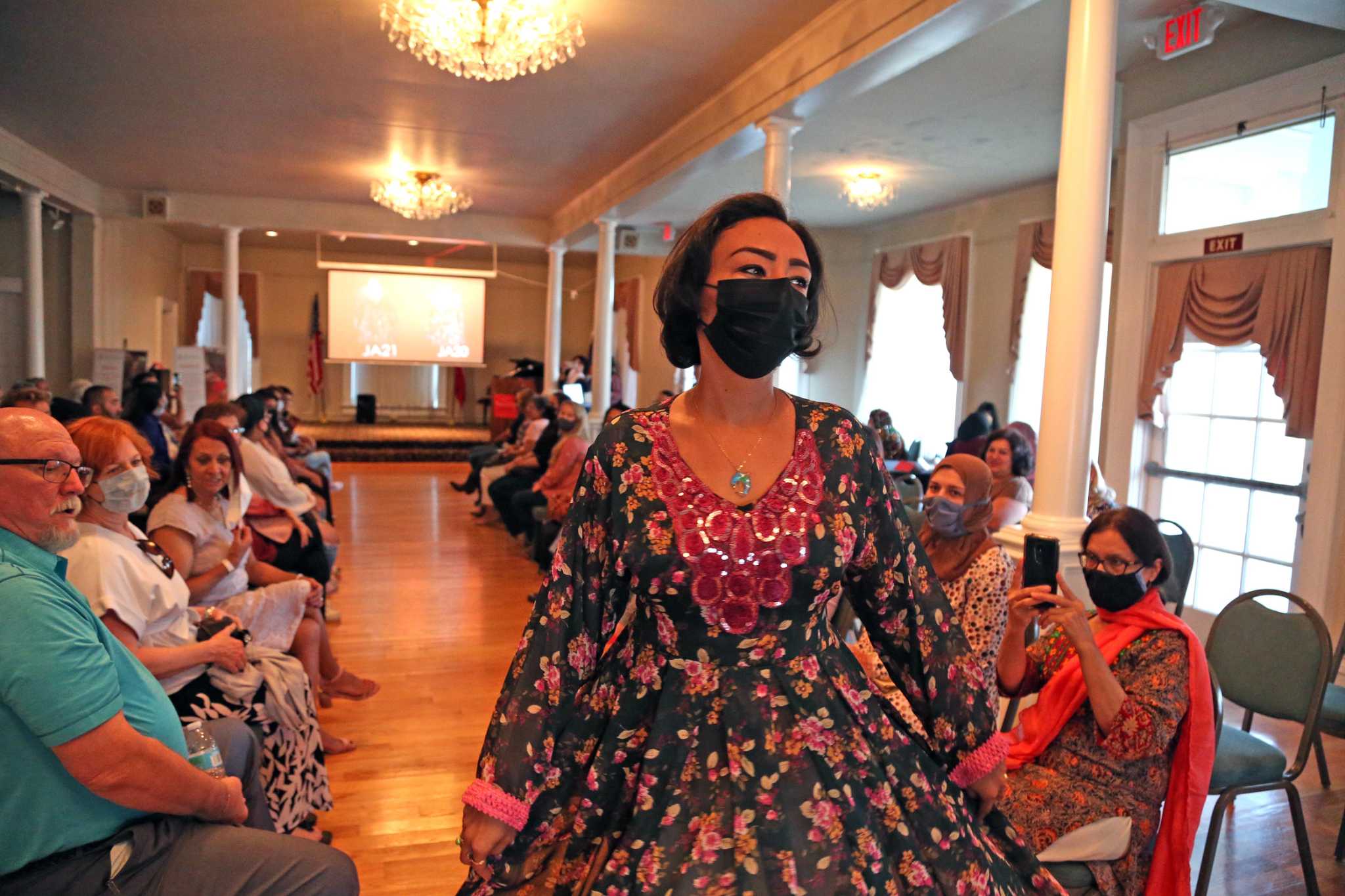 Watching models flaunt clothes she’d made filled Soma Farzad with an emotion that might best be described as euphoria.

It “made me very happy,” she said with the aid of an impromptu translator, Catholic Charities caseworker Haajarah Bayat.

In fact, Farzad added with a shy smile, “I’ve never been this happy before.”

Farzad was one of 14 Afghan seamstresses whose work was showcased at a fashion show at the Women’s Club of San Antonio.

Some of the seamstresses had arrived in the United States as recently as a few months ago. However, Farzad immigrated to the United States from Mazār-i-Sharīf, Afghanistan, 8½ years ago. The family had left their home because her husband was as an interpreter for U.S. troops, a line of work that put his life as well as that of his wife and children at risk.

Bayat said many such newcomers have had a hard time adjusting to life in the U.S.

“I’ve always tried to get them to be kind of independent, and they always say things like, ‘All I know how to do is sew and cook.’ And I’m like, ‘That’s not all you know how to do. That’s a very valuable skill and a talent,’” she said.

But since they largely work from home, they don’t have many opportunities or the connections to showcase their skills and their wares. “So I was like, ‘What can we do to get them that networking and exposure, to have people recognize their talents?’” Bayat said.

That quest to help led to Friday evening’s fashion show.

Catholic Charities of the Archdiocese of San Antonio provided the women with the tools and materials necessary to sew clothes and organized the show to exhibit the fruits of their labor. 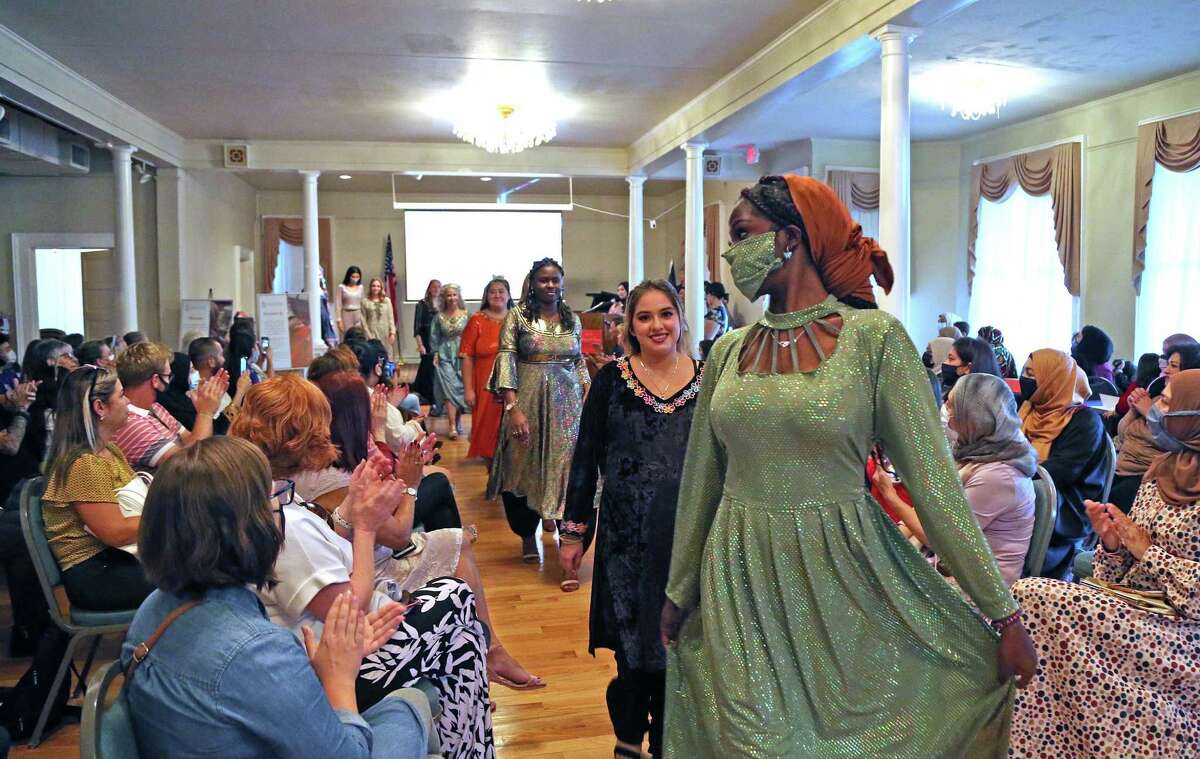 Models walk down the makeshift runway at the fashion show organized by Catholic Charities to showcase the work of Afghan seamstresses who have immigrated to the United States.

“For me, what is important is to give them a sense of becoming independent. They were in a country where they really were relegated to second place. Coming to the U.S. is a dream for some of them. It’s a place to start a new life,” said J. Antonio Fernandez, the president and CEO of the social services agency. “That’s what we try to do: (give) them an opportunity to actually have a potential job, a potential career where they can have income.”

Friday night, models of various ages and races cruised a makeshift catwalk in a display of radically different cuts, prints and fabrics as a crowd of about 50 people watched. Sequins were a common motif, as were pom-poms reminiscent of the ones sold in bulk at Michael’s.

Seated in the second row, Draven Wagner, the husband of one of the models, bounced a diapered infant on his knee. “It was just really powerful,” he said of the experience, calling the clothes on display “masterworks.”

Many of the models were Catholic Charities employees, student Fidele Gazamoundjou said. However, at least one of them, June Griffin Garcia, had professional modeling experience.

Their turns on the runway came about through connections to Catholic Charities. Gazamoundjou’s sister works for the organization. Griffin Garcia started teaching English as a second language there three weeks ago.

One of Griffin Garcia’s students was a seamstress whose work was being showcased. That made it a “no-brainer” to help out, Griffin Garcia said.

“I feel really honored to be a part of it,” she said. 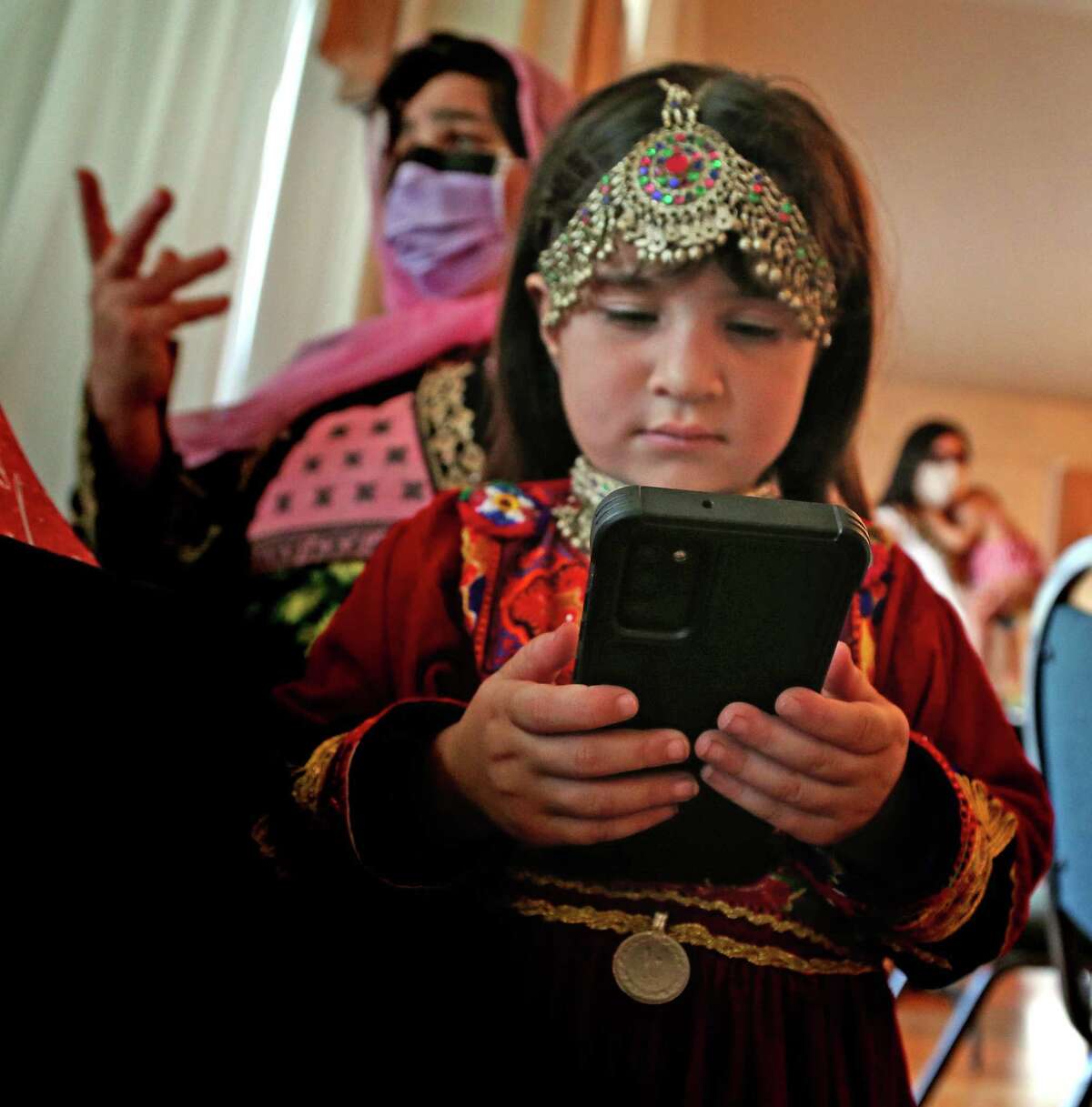 Model Marnama Bismala, 3, plays a game as she waits for the fashion show to begin.

When the show was over, the clothes went on sale in the lobby one floor below: a taupe pantsuit; a calf-length black blazer with striking, jewel-toned trim; dozens of dresses in nearly every color of the rainbow. The prices ranged from $30 to $40 for baby clothes to $60 to $120 for adult clothes, Bayat said. Catholic Charities said 90 percent of the proceeds would be going to the Afghan seamstresses.

While the women might not have college degrees or formal résumés, they have years or decades of experience making clothes.

Farzad, for example, began to sew when she was 10 years old. She designed the dress Bayat was wearing Friday, a rose-pink creation that sported an intricately embroidered bodice embedded with silver discs that reflected the light like mirrors.

“This one, she made in one day,” Bayat said of the dress. Turning to Farzad, she listened as Farzad spoke. Translating, she said, “‘If I really sat down and put my mind to it, I could do it in just two hours.’”

Both Farzad and another seamstress, Zarmena Effakhan, hope to turn their sewing expertise into a source of income.

“That’s my dream, and that dream is what pushes me forward. For me, it’s not about making money; it’s about making something of myself and making a name for myself,” Farzad said.

Judging by the reception the show received, that dream might be within reach.