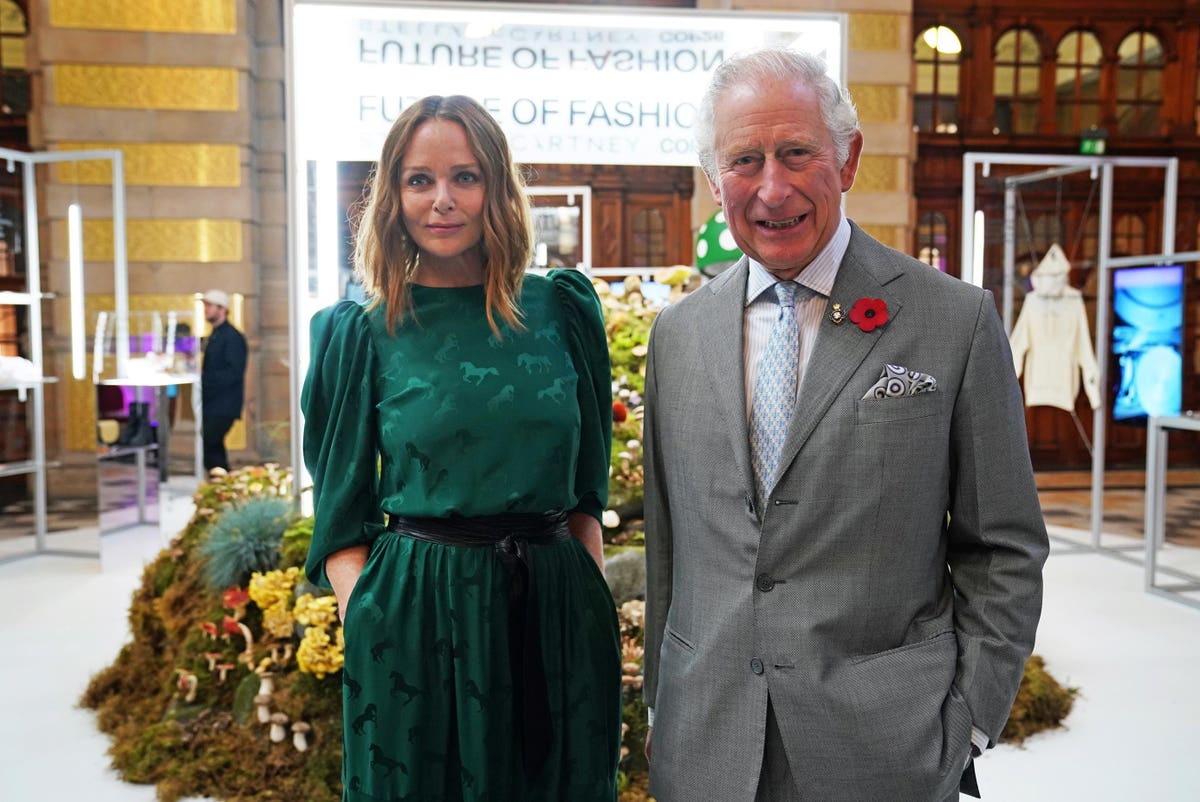 Prince Charles, Prince of Wales, speaks to designer Stella McCartney as he views a fashion installation by the designer at the Kelvingrove Art Gallery and Museum, during the Cop26 summit on November 3, 2021 in Glasgow, Scotland.

“I’m here today because I’m begging for policy to be put in place for the fashion industry,” she tells Forbes at the opening of her “Future of Fashion: An innovation conversation with Stella McCartney” exhibit at the Kelvingrove Art Gallery and Museum in Glasgow, on the sideline of the COP26 UN climate conference.

The exhibit showcases some of the new materials the designer has been busy developing with startups such as California-based Bolt Threads—which has developed a leather made from mycelium, the roots of a mushroom, which it calls Mylo—as well as Seattle-based Evrnu, whose NuCycl™️ and ECONYLⓇ fabrics are made from regenerated nylon sourced from postconsumer waste and ocean plastics. As part of her work with Adidas, McCartney has also created the world’s first-ever vegan soccer boots, in collaboration with French player Paul Pogba.

Football boots designed by Stella McCartney on display at a fashion installation by the designer on exhibit at the Kelvingrove Art Gallery and Museum during the Cop26 summit in Glasgow.

Leather is one of the materials that, for McCartney, epitomizes the environmental and social issues the fashion industry is responsible for: animal rights abuse, water pollution, meager pay and the deplorable working conditions of garment workers. The designer launched a petition to demand governments ban the use of animal leather and fur in the fashion industry, following the first step set by Israel in June, when it became the first country in the world to ban the fur trade. Few governments, overall, have taken steps to investigate the fashion industry’s sustainability efforts, with the U.K. launching an inquiry in 2018 that was then reopened in 2020, and France passing a law banning the destruction of unsold nonfood stock last year in a bid to end fashion waste.

Exciting as alternative materials can be, they remain difficult to scale, a point illustrated by Evrnu cofounder and CEO Stacy Flynn who spoke at a panel organized to mark the exhibition launch. Flynn lamented the vicious cycle in which retailers want to see investors’ backing and investors want to see retailers’ interest before committing to backing a new product: “It’s going to take a leap of faith,” she says. “We’re making headway,” she adds—Evrnu closed a $15 million Series B funding in October, “but nowhere near where it’s meant to be.”

McCartney is aware that tackling the materials used in fashion is only one of the issues the industry needs to face to reduce its carbon footprint, which currently accounts for an estimated 10% of yearly global greenhouse gas emissions. Fast fashion’s business model has a lot to answer for, as well.

“Fast-fashion [brands] obviously need to reduce what they produce,” McCartney says, explaining that she, too, has gone through the process of reducing her product range. “I want to show my industry that you can have a business model in working in a cleaner, more sustainable way. You don’t have to kill and don’t have to cut down rainforests, and you can have a sexy, well-designed, lasting, beautiful bag. I’m here to show that you can still make money.”

She rejects the idea that animal cruelty and the destruction of trees is the only way to be profitable. “There’s this kind of mindset—that killing animals just for handbags, slaughtering them, skinning them, cutting down our rain forests—is fine, that’s capitalism, and that’s how we should make money. I’m, like—that should be guilt, you should feel bad when you work in that way.”

A bag designed by Stella McCartney made of Bolt Thread’s Mylo leatherlike material made of mycelium, the root of a mushroom.

While she’s unequivocal that fast fashion’s business model needs to change, she also has her eyes on the luxury houses. For 17 years McCartney partnered with French luxury conglomerate Kering, but then bought out their stake in 2018. Sixteen months later, she started working with Kering’s rival LVMH. The latest project between McCartney and LVMH involves funding a pilot program involving a regenerative cotton farm in Turkey with textile manufacturer Söktaş. “[Those] I have access to, I’m trying to infiltrate in a positive way, educate them and create change,” she says.

The master plan is to increase orders for sustainable materials and get their price points down. McCartney remains optimistic that more alternative materials will become mainstream within the next decade. “It’s taking more time, I think, than anybody would have liked,” she says, “I think that we’ll get to the stage soon, hopefully, where they can get to the right price point and the right rollout numbers.”

Modeling Agencies – Their Importance in the Fashion Industry

The Power of "V" Into Designer Clothing Industry